This post is a reflection by Kristen Harman, of the Gamma Chapter of Alpha Omega Epsilon. She participated in North Carolina State University’s Circle of Sisterhood trek to Nicaragua.

My trek started with a 2 am alarm on Monday morning. Normally this would have resulted in an immediate snooze at such an early hour, but the excitement for the week ahead had me out of bed in an instant. I nervously got dressed and prepared for my day of travel to Nicaragua. After double, and let’s be honest, triple checking I had everything in order I set off to meet up with the fourteen other sorority women representing North Carolina State University.

Our flight departed from Raleigh before the sun rose, and we were off! We had been preparing for this moment for months now and finally we were on our way. After catching our connecting flight we landed in Managua. As soon as we stepped off the plane we were greeted with a wall of humidity. With sweat already forming we found our trek leader among the crowds of people swarming the Managua airport. She was a spunky little thing that navigated her way through the throngs of people with no problem.

After loading all of our belongings on an old painted school bus we climbed aboard to begin our bumpy four hour drive to the city of Matagalpa where we would spend the night at a local hotel. In the morning it was another four hour drive to the city of El Cua, where we traded our painted bus for trucks to better climb the rocky terrain to our village. The roads leading to our village were some of the steepest I had seen, the kind of roads that make your stomach drop almost as if you were on a roller coaster. With our hands gripped tight to the seats and doors, we finally finished our climb to the top of the mountain and were warmly welcomed by a crowd of people singing and beating drums. Finally, we had reached our home for the next few days. 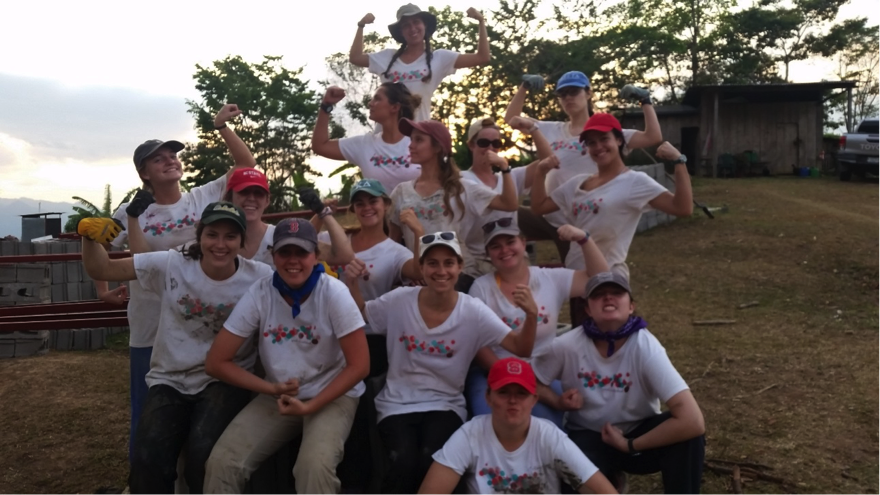 The welcome into the community of la Linda Vista was amazing. The villagers had huge smiles on their faces as they walked us through the build site and community. The welcoming ceremony was filled with the villagers singing, dancing and expressing their excitement for the week ahead. The entire village sang the Nicaraguan National Anthem and asked us to do the same. After a few giggles and wide eyed looks at one another, we stood to sing our national anthem. During the next part of the ceremony, the official contract for the school was signed by every adult member of the community. The contract stated that we would all work together to build the school and that the villagers would finish the school once we had departed. Once the contract had been signed by all members of the community, we were assigned our host families.

Each of us were called to the front of the ceremony where our host families welcomed us with bright smiles and big hugs. After meeting our host family we began our climb to their house. We lived on the top of a HUGE hill surrounded by coffee plants and banana trees. The house we stayed in was modest, an open kitchen with dirt floor that allowed chickens to run in and out as they pleased. Beyond the kitchen was a small wooden structure that had two rooms in it, which was really more of a hallway and one large bedroom for the entire family to stay in. Our family sacrificed their main bedroom for my roommate and I to set up our cots and mosquito nets for the week.

Our family had two sons and a daughter, who followed us around as we explored the latrina and shower area just outside their home. They offered us fresh bananas, that I swear do not compare to any banana I have ever had, something about them was just SO much better.

Some of my most precious memories are from the time spent with my host family. Every night when we would come home from a long day of work, our host sister would meet us at the bottom of the hill to walk with us. After taking a shower she would take my hand and lead me to a stump where she instructed me to sit. She would then gently brush out my hair and braid it. As she would braid she would chat away trying to teach me different words and learn their English counterpart. One day when we were sitting in the house after dinner, I was watching all the baby chicks run around the kitchen. My host sister snatched one off of the ground and plopped it right in my hands. I felt the momentary panic come into my face as I held this wiggling and chirping chick, I had no clue what to do with it. My host sister laughed and grabbed it from my hands. She then proceeded to teach me how to grab one off of the floor myself. After a couple of failed attempts, all of which were accompanied by a little squeal, I was able to actually grab one! I got so excited and immediately held it up to show my family I had caught one. The excitement I got over such a silly task made my whole family break out into laughter and I soon joined in after replacing the chick on the ground.

The last night we spent with our host family was filled full of laughter and some fun competition among the entire family. It was on that night that I introduced them to the game Jenga and they loved it! Jenga was a game I could easily explain through demonstration and was easy for all ages to play. For me knowing that they hold family to such a high regard, it was wonderful seeing something that had brought my family together for years do the same for them. We spent that last night laughing and chatting among our family, and it really was just like family. They had done everything in their power to make us feel welcome. My family was not wealthy in the material sense but had an abundance of wealth when it came to what really matters most, family and friends. They were willing to offer up their home to two strange American women for a week just to help ensure that their children would get an opportunity they never had by being able to go to school.

It was in my last night, when my trek leader and translator came to our house that I truly realized the kind of impact we would hold with this community. E

ducation is something I have absolutely taken for granted, for me it was expected and really almost a rite of passage in order to get a good paying job and have a family. When I was explaining to my trek leader what I would like to say to my family, I was looking at my host siblings and realized that the school meant so much more to them than just bringing education closer to their family.

It would change their lives, it would open doors that they hadn’t even dreamt about yet. It would challenge barriers set by geographical location and by what the village was accustomed to doing. By having a school in close proximity to them, we could be empowering a whole new generation of leaders or engineers.

Education is power and through Circle of Sisterhood we have given that power back to their community. That school is more than just an opportunity, it’s a change in their way of life and is representative of the values in education and opportunity that Panhellenic women aim to represent. In creating this educational gathering place, we have helped provide a way for them to not only surpass but completely shatter their preconceived ideas about what they will do in their future.

I honestly am so thankful and proud to say that I have had the privilege of sharing this experience with fourteen other strong and beautiful women from the NCSU Panhellenic community. There is truly no one else I would have wanted to share this experience with and I am honored to call every single one of them my friend. ¡Somos BuildOn!

"What we value more as women than our sororities is our education. So we will be supporting @CofS_Foundation moving forward" - WFU PHC